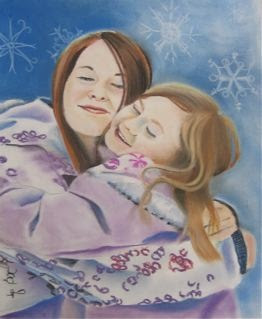 Mary Ellen and Rob are coming for dinner tonight, along with Ingrid and Dan.  We're making a big roast beef dinner.  I'm excited to give ME and R their wedding gift; this portrait of the girls.  I took some photos while we had the girls earlier this month, and did this on Friday evening.  It's the first portrait I've attempted in pastel.  They were fun to work with.  I didn't think I'd be able to get enough detail, but while unpacking all the boxes from the storage locker I found some pastel pencils I didn't remember I had.  I used them along with the fat chalk pastels.  I'm happy with it.  I stole one of the frames from a piece I did years ago that I don't really love and we popped it in there.  Done!
We raided the storage locker on Friday, unearthing all kinds of art supplies and paintings.  We took it all up the hill and went on a painting hanging frenzy.  The Apex condo looks like a Carol McQuaid Gallery!  They're mostly snow scenes, many from when I lived in Whistler.  Fitting for a ski condo.  It's getting homier and homier here.  Love it.
Posted by Sketchalina at 8:23 AM No comments: I went on line to find M. Hermesh's contact info because I'd heard many months ago that he does a life drawing session at his home studio. The session was great - lots of good banter - wonderful atmosphere. Michael showed us around his studio on the break. It was wild to see his sculptures in their 'developmental' stages. I love his work. Here's a sketch of his now famous 'Frank the Baggage Handler' I did out at Red Rooster Winery a while ago.

When we were done we shared our work and a glass of wine. I'll definitely be back!  Here are a few more from the session 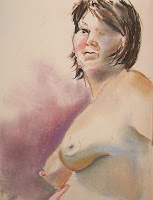 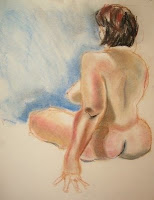 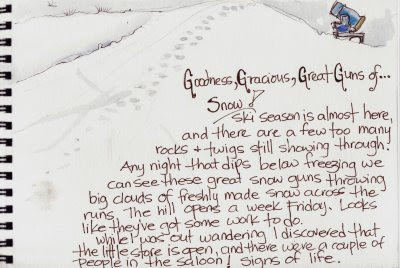 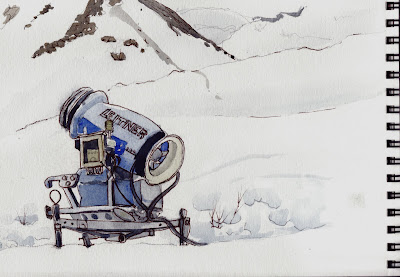 When we were out sketching yesterday I was eyeing up these snow guns.  They're interesting, and they sure can crank out the white stuff when they need to.  Less than 2 weeks until the hill opens - I'm thinking we'll be seeing these hard at work over then few days.
When I wandered into the village and discovered that the store was open, it was like one of those scenes out of a post apocalyptic movie - wandering is silence for half the movie, then opening a door and finding humans.  These ones had fresh veggies and dairy products to sell.  Yay!
Posted by Sketchalina at 4:58 PM 1 comment: lady walking upside down
Originally uploaded by sketchalina
I just discovered Karen Jurick's blog www.differentstrokesfromdifferentfolks.blogspot.com/, where loads of people try out a weekly painting challenge then post to the blog. This challenge was to draw from a photo upside down, then post the result right side up. Not too happy with my first attempt, but it was fun. Her head may be too small for her body, but her right ankle is nice ;-). There's some great work on the blog, and Karen's writing and challenges are interesting.
Posted by Sketchalina at 2:46 PM 1 comment: 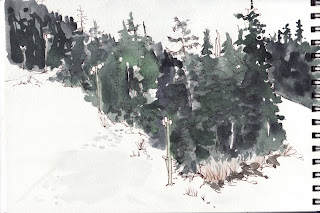 no minors b
Originally uploaded by sketchalina
I went to Life Drawing in Kelowna yesterday with CT, and she ended up coming back to Apex with me for the night. Greg's away, and it was really nice to have the company. There are still just a handful of people up here - pre season. We ate, drank wine and told each other stories all night. Today we went for a wander and found (of course) a great sketching spot. I sketched this; she sketched me in my giant parka sketching this. Wish I had her drawing to post here, but it wasn't finished. She's just headed back to K-town, and I here on hermit hill. There's still some unpacking to do, but I doubt that's going to make it onto my priority list for the evening. 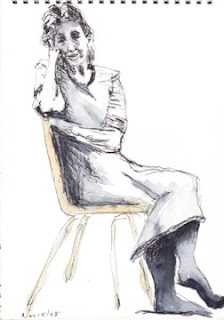 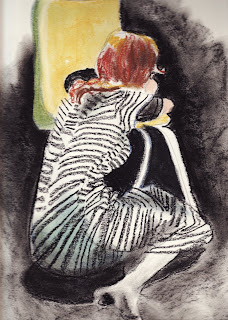 Here are our sketches from life drawing yesterday. There was an open house going on at the Rotary Centre, so our model was draped. These stripes posed and interesting challenge. They kind of worked as contour lines on her body. Fun.
My sketch is the one with the stripes.  The other is CT's.
Posted by Sketchalina at 4:16 PM No comments: 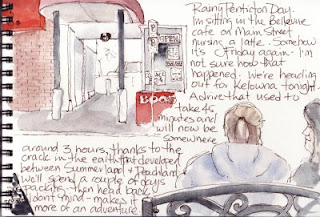 timmy's a
Originally uploaded by sketchalinaSat in the Bellevue Cafe in Penticton and sketched this today. It's interesting with this road between our two cities out of commission. So much of our day to day experience now revolves around where we are; where we aren't and what we need or want that's on the other side. End of the work week, and we got in the Jeep and drove down to Princeton, had dinner, then drove up the Coqu to Peachland and into Kelowna. Total trip time? Just over 4 hours. Not bad for a road trip, but as a commute between home and the office it's a bit excessive. We'll load up the Jeep with what we need for the next week and head back up the hill on Sunday. Somewhere in this back and forthing I need to clear enough stuff out of the Kelowna apartment for my parents to be able to move in comfortably. I'm so looking forward to having them closer (well, it'll be closer once the road re-opens). I miss them.
Posted by Sketchalina at 9:19 PM 2 comments: ric's
Originally uploaded by sketchalina
My most recent work project came to a close this past week. It's like being let out of school at the end of the year! People keep asking me what I'm going to do next, but I think I'd like to avoid 'next' for a while, and just enjoy sketching, playing music, cooking, writing, and hanging out with the people I love. I'm packing up the Kelowna apartment and we're moving into the ski condo for the winter. We have season's passes all lined up. I bought five new hat and scarf sets in New York last week to keep my head warm, and I'm ready to hibernate. I say that now; I may be missing human interaction by sometime next week and make a run for the nearest city. My parents are moving into this lovely apartment we've been living in in Kelowna, so at least I have some place to run to.

One of the things I kept dreaming about while I was working was having time to sketch again. I finally made it out there yesterday; did this one and another of a building facade on Bernard Avenue. So many people stopped to talk - I really enjoy that part of sketching outside. Now I can't sleep, so I've spent the last several hours laying out my sketches into books on my Mac. I'm using iBooks. It's very cool. If you're on my list this year you may be getting one ;-)

This morning I'm flying down to Penticton. The road is still out between these two Okanagan cities due to a large crack in the earth thanks to this summer's construction. We can't drive it anymore, but we can get cheap flights on these cool little airlines (Southern Skies, Coastal Pacific) for about $55 each way. It's not that much more than the cost of gas in the SUV! I'm heading down there to shave the head of my dear and beautiful friend Mary Ellen. She's donating her long red hair to help make a wig for cancer patients. She's one of my heroes, for this reason and many more. We have radio coverage and someone is coming from the paper as well. Hopefully we'll inspire others to do the same. I'm off the list however, since my hair currently isn't long enough to make a wig for a Pixie!
Posted by Sketchalina at 7:12 AM No comments:

Sketchalina
If you see someone sitting under a tree, on a cafe patio, or at the side of the road squinting at the view, sketchbook in hand, giant white poodle-y dog by her side, it's probably me. I love to wander around, painting, looking at things in wonder. I'm a Vancouver based artist and work primarily in printmaking, watercolour and chalk. Feel free to contact me about commissions, chalkboard projects, workshops, or,just to,talk art!