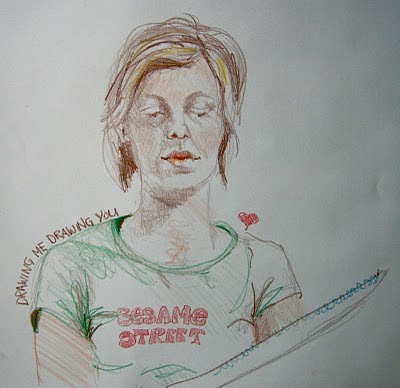 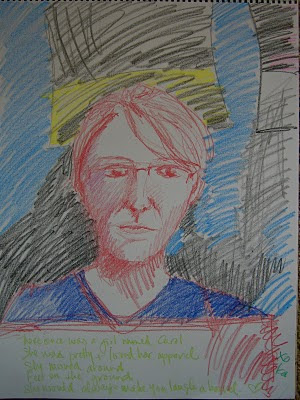 Two of my all time favorite artist souls stopped in for a sleepover last night on their way across the country.  Pye and Besh are heading from their home in Newfoundland to visit Besh's family on Vancouver Island.  I got to know Pye and Besh when I was living in Collingwood, Ontario.  They came in on a timeshare presentation and I was the big bad closer.  It was instant love.  She is a FANTASTIC painter (http://www.keli-annpye-beshara.ca/) and he is a brilliant, revolutionary knife maker, among so many other things (http://www.beshknives.com/).

We had a big feast of a dinner.  Afterward, I noticed Pye eyeing up my box of crayola crayons, sniffing them, looking wistful, so we whipped out two big pads of paper and did crayon sketches of each other.  Fun!  That's my version of Pye at the top of the post, and her version of me here.  It was a total show-and-tell exchange of an evening, food, art, knives, business ideas.  Awesome.  I love you both!  I'm so glad you came, and that you had a chance to meet Greg.   Until the next time...
Posted by Sketchalina at 10:52 AM No comments: 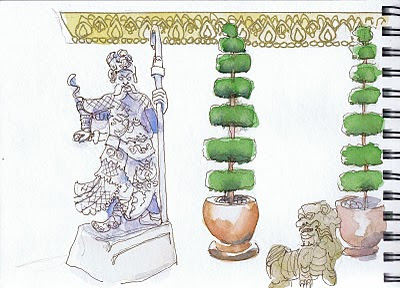 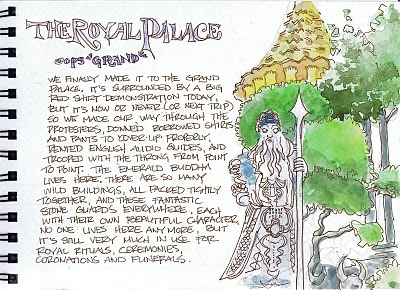 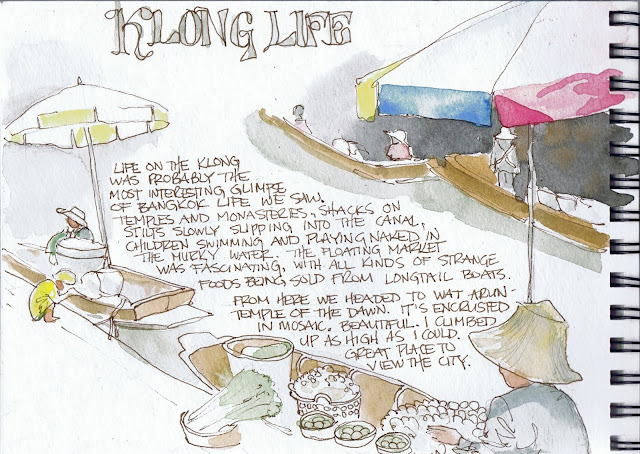 Posted by Sketchalina at 1:35 PM No comments: 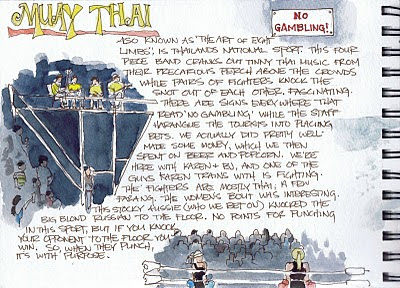 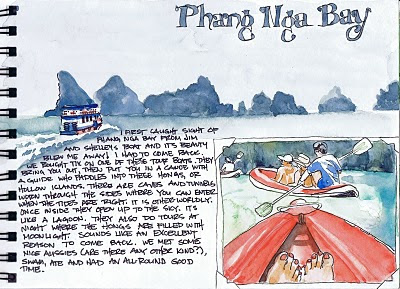 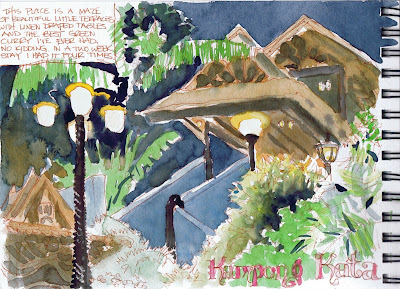 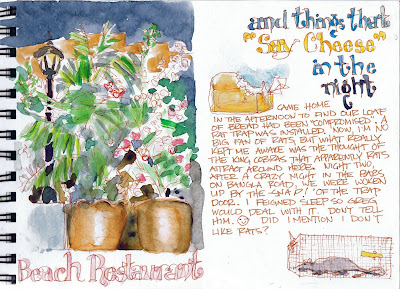 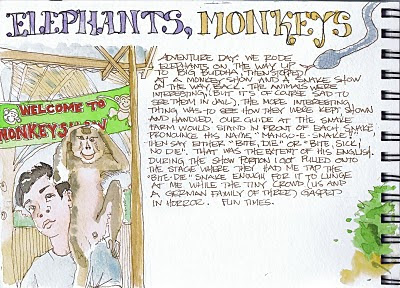 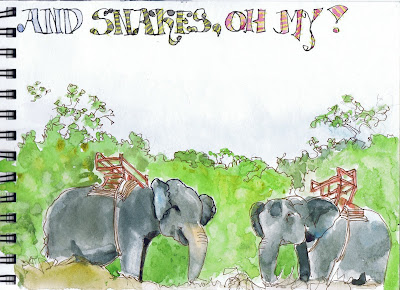 Part of the Thailand Sketchbook.  More to come.  Thanks Ken and Janine for such a great trip!
Posted by Sketchalina at 11:12 AM 4 comments: 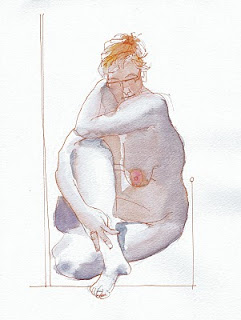 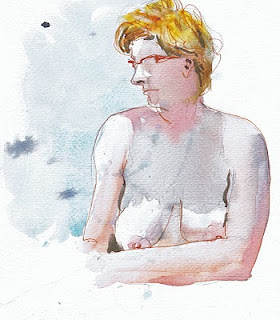 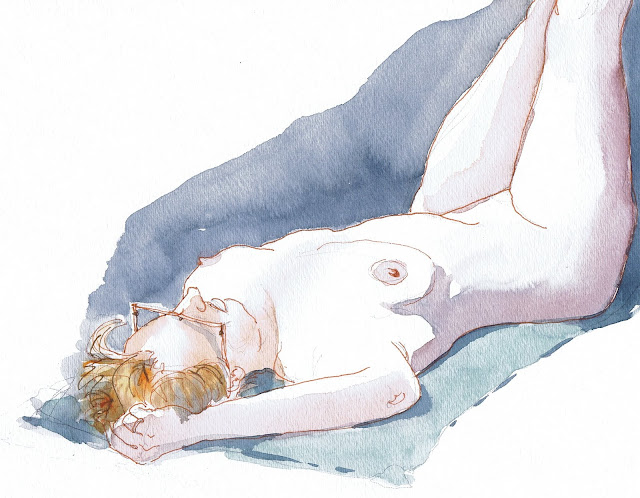 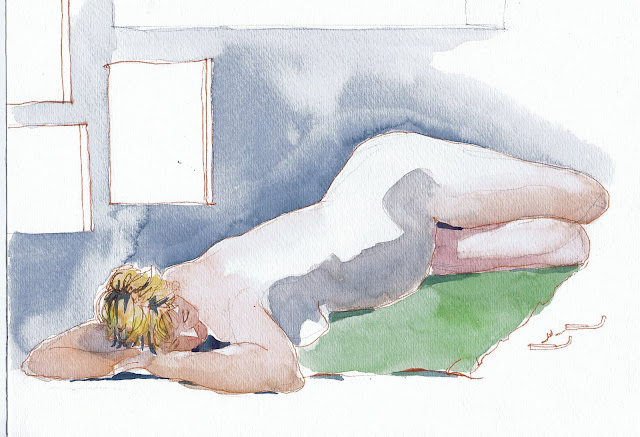 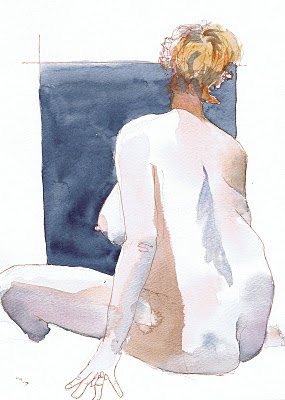 After all the business of new job, courses, life flux and upheaval, it felt good to shut of brain and go paint.  I bought a plain old  mid-sized cheap watercolour pad - no blocks to have to peel mid-session, no feeling like I have to squish 2 or 3 images on one sheet so I'm not wasting paper, and no trying to fit a figure onto a sketchbook page.  These images all have the same feel, but hey, that's the mood I was in.  I like this model (I like them all).  I like how her glasses obscure her eyes.
Posted by Sketchalina at 7:18 AM 1 comment:

I made a dangerous discover yesterday. I was on flickr and saw something in a title that said 'Virtual Paintout'. I had to investigate, so I googled. An artist named Bill Guffey keeps a blog where he invites artists to journey, via googlemaps, to a different place each month. Every sketch needs to be done from a googlemaps photo. The paintings on the blog are so interesting, you'd swear they were all done by a group of artists traveling the island together. I guess they sort of were. I went for a wander myself and literally got lost meandering down little lane ways, not being able to resist peeking around the next corner. When I went back to the blog, I was recognizing if not the exact locations, the feel of the places I experienced on my virtual journey. I was hooked. It was a bit difficult to settle on a spot (maybe there's something even better around the next corner), so I started emailing myself good ones, then went back and looked at them later. I chose this spot because I liked the intimate feel of people doing their thing, fishing, working, oblivious to the fact that the googlemap vehicle was cruising behind them (kind of like a sketchbook adventurer). I tried to keep it in my sketchbooky style; not make a 'studio painting' out of it. It'd be fun to do a whole sketchbook journey of a place I've never been - relying entirely on google, not just for the images, but also for the info, restaurants, museums, the works. Or maybe I'll finish the 300 projects I already have on the go.
Posted by Sketchalina at 9:18 AM No comments:

Golden Noodles and Another Close Encounter With Danger

Yogi. He's such a love ball. I showed up on my brother's doorstep with my giant hound in tow (this is an oversized chair he's in). They took good care of us all week. I spent my days doing my post licensing course, and Yogi spent them at Doggytopia. Afterwards, we'd go walk the string of interconnected parks that run from behind their house through a series of little, cul-de-sac-ish neighbourhoods. I was very glad to have him with me. I think we're both craving a little constancy in our lives right now. He's going through a phase where he really doesn't want to get in the car. Ever. He takes one look when I open the door, then backs up on his leash as far as he can go, looking woeful the whole way. He used to love the car.

Our final day in Kelowna, I went to pick him up after my course. The previous customer couldn't find her collar. A big search ensued, and I was standing, just short of drumming my fingers on the counter, waiting to pay and go. Finally the girl stopped and rung me in. We hopped in my car, top down, and drove away. The whole delay probably wasn't more than four minutes. We drove down Clement, where I'd just come from, and two blocks up was a gruesome scene. A vehicle lay flipped on it's roof, people standing around in horror, no emergency vehicles there yet. I asked someone if 911 had been called yet. "Yes". "Did this just happen?" I asked. "Minutes ago" he replied.
I looked at my tall dog, head sticking well out of the convertible, as was mine. I looked at the car flipped on its lid. I don't know what happened, but I was thankful that we had a three minute delay at the cash desk.
Posted by Sketchalina at 7:34 AM No comments: 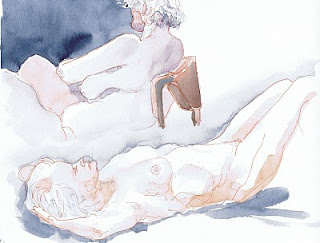 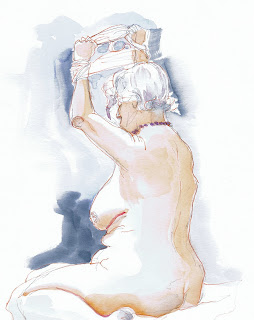 Wednesday Night Life Drawing - I absolutely
loved this model! She could hold a pose (even the t-shirt over her head) for 20 minutes without moving, which is always helpful. Far more importantly, she held a grace and a body confidence that takes some of the fear out of getting older. To a woman in her 40's (me), aware that time will continue to march on from here, that's a reassuring thing to see. She was sensual and fun, and let's face it - gorgeous! And she had a good tattoo collection, which I just didn't capture in our 20 minute
poses. 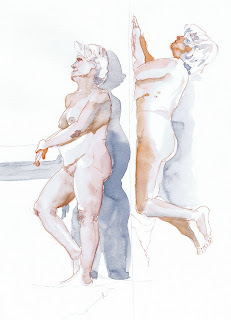 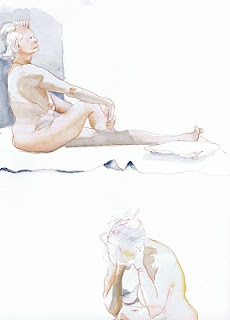 Posted by Sketchalina at 1:13 PM 3 comments:

Sketchalina
If you see someone sitting under a tree, on a cafe patio, or at the side of the road squinting at the view, sketchbook in hand, giant white poodle-y dog by her side, it's probably me. I love to wander around, painting, looking at things in wonder. I'm a Vancouver based artist and work primarily in printmaking, watercolour and chalk. Feel free to contact me about commissions, chalkboard projects, workshops, or,just to,talk art!